Kurush Deboo was born on 12th September, 1963 in Mumbai (Bombay) (Maharashtra State, India) and brought up in Navsari (Gujarat State). He had completed his Commerce Graduation in Navsari in 1984 and was migrated to Mumbai for the post graduation in Advertising and Marketing. He had completed Diploma in Advertising & Marketing from Xavier’s Institute of Communications, Mumbai in 1986 and Diploma in Marketing Management from Jamnalal Bajaj Institute of Management, University of Mumbai in 1987.

Kurush Deboo, did his diploma in acting from Roshan Taneja’s Actors Studio in 1988. Soon after he made an impressive debut in the film “Percy”, produced by NFDC, which earned him lots of critical acclaim and a nomination for the Best Actor in National Awards 1990. He gave outstanding performance as Tehmul in the Canadian film “Such A Long Journey” which got him international recognition and once again earned him a nomination for the Best Supporting Actor in Canadian Genie Award 1999.

He has acted in many successful Hindi films – “Kabhi Haan Kabhi Naa”, “Page 3”, “Taxi No.9211”, “Apne”, “Jhankar Beats”, “Kasoor” “Bhoothnath Returns”, “My Friend Ganesha 2”, “Lage Raho Munnabhai” to name a few. But one movie that catapulted him to stardom was the super successful “Munnabhai MBBS” wherein his memorable performance in the role of Dr.Rustom Pavri, gave him immense popularity. He has also acted in a wonderful film “Little Zizou” which once again proved his versatility as an actor.

Kurush Deboo is an Indian actor best known for his multiple roles in “The Munna Bhai” series.

One of the most successful films in the year 2003 was “Munnabhai MBBS”. And amidst giants like Sanjay Dutt, Arshad Warsi, Gracy Singh, and Boman Irani, one relative new comer, who still managed to hold his own was Kurush Deboo. Kurush, as the diminutive Parsi, Dr. Rustom Pavri, won many a heart with his controlled performance.

Acting runs in his blood. His father, Homi, was an assistant director to the Billimoria brothers.. But as he was faring badly, he left Mumbai and returned to his native place, Vapi. He set up many theatres there, and Kurush used to star in many of his plays. From childhood, Kurush always wanted to be an actor.

Kurush is an Commerce graduate from Gujarat, and he holds a Diploma in Marketing and Advertising.

After graduation,hecame to Mumbai. Staying in hostels,hestruggled to make both ends meet. He took up jobs in certain private companies, and joined Roshan Tarneja’s Acting School. After passing out, he also took special classes in fighting and dancing. His first break came when he bagged the lead role in the film “Percy”, in 1988.

But although he did get noticed, but no offers came his way. Money was short, and thatswhy he had to join the Godrej group of companies, where he worked for eleven years. In his spare time, he kept doing small roles, on television in shows like “Shakalaka Boom Boom” and “Karishma Ka Karishma”. He also did small roles in films like “Kabhi Haan Kabhi Naa”, “Kasoor”, “Jhankar Beats”, and “Such A long Journey”.

But his life changed completely when he got  “Munnabhai MBBS”. Munnabhai has made him a household face. Wherever he goes somewhere, children and adults come and talk to him, and tell him how much they liked his role. Not only in India, but even in a distant place like Mauritius, people recognized him.

Kurush’s wife works for the “Life Insurance Corporation of India”.

Initially he had a Parsi accent, and thatswhy he could get only Parsi roles. But, in collaboration with a voice consultant and diction teacher in Mumbai, he had mastered this difficulty, and today, he can speak Hindi reasonably well, without an accent.

For Kurush acting is like his God and the director is his teacher.He is extremely passionate about his career in acting.He believes that it’s the role, and not the actor, who is small or big and is willing to go through any amounts of hard work, to reach his goal.

“ ‘Percy’ a sad little film about a gawky youth who seems to be a born looser, is a charmer. There is no doubt that the actor, Kurush Deboo playing the title character must have been considered for the acting award. He is perfect.”         ….. by Bikram Singh, The Jury of National Films Awards in INDIAN EXPRESS, SATURDAY, APRIL 21, 1990.

“In a ‘Mamootty-less year’, my favourite would have been the painstaking brilliance of Kurush Deboo in Percy.”   ….by Iqbal Masud, The Jury of  National Films Awards in SUNDAY MIDDAY, SUNDAY, 15 APRIL, 1990.

“The cast includes Roshan Seth, Soni Razdan, Om Puri and Naseeruddin Shah, but the Scene Stealer is Kurush Deboo who plays ‘Tehmul’, a mentally handicapped man in “SUCH A LONG JOURNEY.”

“Well, Kurush Deboo is India’s Robert de Niro, he prepared so intelligently. He had 48 type-written pages of  notes. Every gesture, every detail, everything he did with a choice that he made. And in the end it looks so natural.

…..by Sturla Gnnarsson, the Director of  “Such A Long Journey” on STAR NEWS at INTERNATIONAL FILMS FESTIVAL OF INDIA, HYDERABAD, JAN 1999. 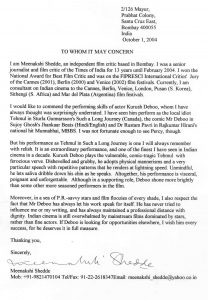 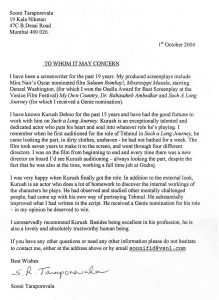 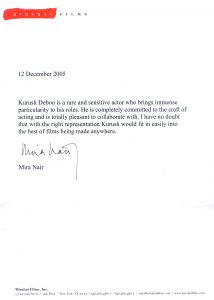